An overview of our clubs history 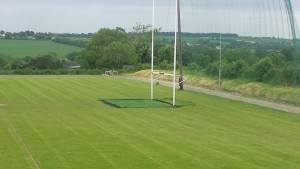 Ballyhogue GAA Club was founded in 1898 by Larry Murphy but games of football had been played in Bree since the foundation of the G.A.A. in 1884.

One of the strongest organisations in the Parish of Bree and certainly one of the oldest is Ballyhogue G.A.A. Club.

During the early years of the clubs existence, games were played in any field that could be procured around the parish and people still point to a number of fields where football and hurling matches took place in bygone times. With the advent of more intensive farming practices it was necessary for the Club to purchase its own land. This land was bought from Pa Breen, Clonmore and consisted of four acres in Knocknagross, Bree.

Ballyhogue’s first ever competitive encounter was with Marshalstown in the 1898 tournament. Their first championship game was also in the same year but they were beaten by Bunclody on scores of 0—5 to 0—2. From that year on Ballyhogue fielded a team each year.

First Players to Represent County
Larry Murphy was the first to represent his county in 1902 and was soon joined by M. Fowler, Tom Mernagh and a very young player named Tom Doyle.

First Player to Represent County
In 1906 Tom Doyle became the first player in the Club to represent at County level.