Results from last nights lotto draw. Numbers drawn were 1-8-14-29. No jackpot winner. Lucky dip winner – Peter Doyle. Next draw 13th May in Byrne’s Bree. Jackpot still remains at €10,000. Please support our club by buying a ticket! Tickets cost just €2 and are available in all local shops!

The next two in our player profiles come from a chap who thinks he might learn how to hurl this year and from a fella who thinks  warming up before a match is for fools!  Liam Kelly and David Byrne, take a bow!

8) If you could attend any sporting event what would it be? The 1994 Castletown Donkey Derby

9) Best advice someone has given you: “Skin ‘em”

11) Most embarrassing moment on/off the pitch: Scoring an own goal from the ball bouncing off my face and getting beaten by Oulart in football all in the one day.

12) Superstitions or match day routines: Can’t have my boots or socks feeling too tight.

13) Favourite Ballyhogue player both past and present. Kojak Kennedy
Why? That wand of a left boot.

14) Best Ballyhogue game you saw/played in. The u21 extra time district final win against the Duffry Rovers. Winning a match in the way we did took character.

15) Best part of playing with Ballyhogue. Plying with the same lads you grew up and went to school with.

16) Hopes for the season ahead. The slight possibility of learning how to hurl.

17) What team do you look forward to playing against? Glynn. Every time.

19) Advice to younger players. Take each game as it comes.

20) One to watch: Declan Power. A Goliath under the high ball

Name: David ‘Daithi’ Byrne
DOB: 4/7/1994
Position: Corner Back
Occupation: Stable Jockey
Favourite Dinner: Roast Beef
Favourite pastime other than sport: Sleeping
Favourite TV Programme: Sons of Anarchy
3 people you’d invite to dinner: Rita Ora, Mila Kunis and Mylie Roche
Sporting Hero: AP Mc Coy
If you could attend any sporting event what would it be: Ladies Beach Volleyball… anywhere
Best advice you have been given: Don’t pull out!
Most embarrassing moment on/off the pitch: Collapsing in the barbers…Taken!!
Superstitions or match day routines: Have a fag in the warm up.
Favourite BH player Past and Present: Past- Owen Byrne- Best Sub ever! Some team player! Present- Mylie Roche- an inspiration!
Best BH game you ever saw/played in: Winning the Junior Football Co. Final last year!
Best part about playing with BH: Sessions, sessions and more sessions!
Hopes for the season: A few more sessions
What team are you looking forward to playing most: Davidstown, plenty of shots there!
Most important skill in hurling/football: Being able to hold your fags in your shorts.
Advice to younger players: Listen!
One to watch: Dutchy

So you can get to know our adult players better we have come up with a little Q and A to help. Here are the first two with Intermediate goalkeeper Myles ‘Mylie’ Roche, and Enda ‘Stumpy’ Byrne

4) Favourite pastime outside sport: Cars, going to the cinema and a few pints!!

8)If you could attend any sporting event what would it be? Champions League Final or Mayweather/Pacquiao fight this weekend

9) Best advice someone has given you: Dont mind what others think, as long as you give your best thats what matters the most.

11) Most embarrassing moment on/off the pitch: Letting in 7 goals in a game against Shamrocks underage, prob minor or u21, never forget it.

12) Superstitions or match day routines: None atal, just take each game as it comes.

13) Favourite Ballyhogue player both past and present. Why? Past: Sean O Neill surely counts as past by now, always performed well in games and his screams and shouts during a match are missed. Present: Noel Roche, can change a game at anytime, speed merchant.

14) Best Ballyhogue game you saw/played in. Best game I saw was junior b hurlers winning county final. Few games i played in were good, some we lost and some we won but for me it has to be semi final against St.James in Wexford Park even doh we lost by a few points.

15) Best part of playing with Ballyhogue. Playing with all the lads that I grew up with since we started from underage and the shite talk on a night out after a match in the pub.

16) Hopes for the season ahead. Hopefully get to a final in either football or hurling. Getting back to senior would be some achievement in football.

17) What team do you look forward to playing against? St. James and Glynn, few games in the past fee years have been entertaining and tough.

18) Most important skill in hurling/football. First touch in hurling prob the most important, and in football been able to kick with both feet, always gets you out of trouble.

20) One to watch: Football: Shane Doyle, wexford minor captain says it all. Hurling: Enda “Stumpy” Byrne, some man to burst lads at training and can rattle the net if given the chance.

If you could attend any sporting event what would it be: Foxy Boxing

Best advice someone has given you: Don’t warm up or you’ll be beat before the match

Most embarrassing moment on/off the pitch: Dropping the ball in last year’s u21 final and letting in a goal.. We lost….

Superstitions or match day routines: Go to mass the night before

Favourite player past or present: Past – Kojak, wicked left foot but no right one to his name! Present- Mick Parker, real role model for the chaps

Best Ballyhogue game you ever saw/played in: Junior B hurling Co. Final

Best part of playing with Ballyhogue: Playing with the fellas you grew up with

Hopes for the season: Get off the bench for more than 5 minutes

Team most looking forward to playing: Davidstown, plenty of shots.

Most important skill in football/hurling: your brain

Advice to younger players: Never miss training, training is where the matches are won!

One to watch: Me and my managerial career! 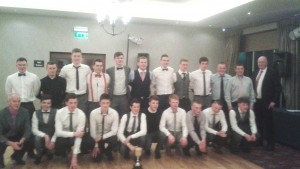 The Celebratory Dinner Dance was held recently in the Riverside Park Hotel Enniscorthy. It was a great night, that was enjoyed by 120 people. A delicious meal was served followed by the speeches from club chairperson Tony Hennebry and the Lenister Council Chairperson who also presented our Under 21 District Champions and Co. Finalists and our Junior Football District Champions and Co. Champions with their medals. We then had The Tee-Jays entertain us with their music followed by DJ Mick Kelly who played into the early hours of the morning! A great night was had by all!

The club are holding their registration night on Friday 3rd of April at 8.30pm in the Hall in Bree.

The rates are as follows,

Family-€100 cash or €80 if paid by Direct Debit. Forms available at Registration night